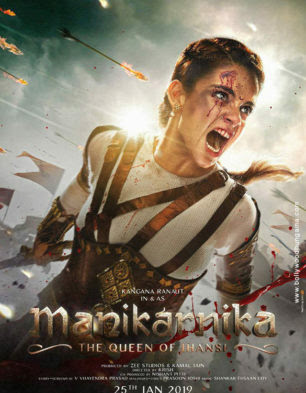 Manikarnika: The Queen of Jhansi is an upcoming Indian historical biographical film based on the life of Rani Laxmibai of Jhansi.[5] It is directed by Krish and Kangana Ranaut and produced by Zee Studios in association with Kamal Jain and Nishant Pitti. The film stars Kangana Ranaut in title role.[6]
Principal photography on the film began in May 2017.[7] The film is scheduled to be released on 25 January 2019.[3][1]
The film is based on the life of Rani Laxmi Bai of Jhansi and her war against the British East India Company, during the Indian Rebellion of 1857.
Sukant Panigrahy, Sriram Iyengar and Sujeet Sawant are production designers of the film. Sujeet and Sriram have also done production designing for Bajirao Mastani .[15]
Principal photography completed in October 2018.[16] Due to his prior commitments, the original director Krish moved on to direct N. T. R., and Ranaut took over direction. Both she and Krish will receive director's credit.[17]
The first poster was released on 15 August 2018[19]. A short official teaser of the film was released on 2 October 2018[20]. The official trailer of the film was released on 18 December 2018.[21][15]
Theatrical posters of the film were released in two languages for simultaneous release of the film in Tamil and Telugu with Hindi version on 4 January 2019.[22]
Trailers of Manikarnika:The Queen Of Jhansi in Telugu & Tamil have been released simultaneously on 4th January at Hyderabad & Chennai.[23][24][25]
Manikarnika The Queen Of Jhansi Official Music Launch took place on 9th January.
The Manikarnika Official Music Album has been released on 9th January.
The Video Song from Manikarnika Titled as " Vijayi Bhava" is out now.