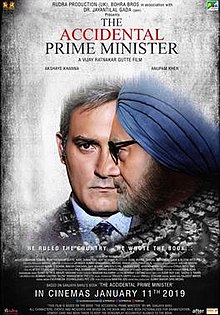 The Accidental Prime Minister is an upcoming 2019 Indian biographical film directed by Vijay Ratnakar Gutte and written by Mayank Tewari, based on the 2014 memoir of the same name by Sanjaya Baru.[2] It was produced by the Bohra Bros under Rudra Production (UK), in association with Jayantilal Gada under the banner of Pen India Limited. It stars Anupam Kher as Manmohan Singh, the economist and politician who served as the Prime Minister of India from 2004 to 2014 under the United Progressive Alliance. 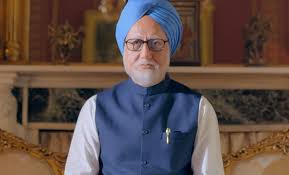 The first look of the film was released on 6 June 2017 through Anupam Kher's official Twitter handle.[12][13] Fresh poster of the film giving date of release of the film and trailer presented on 27 December 2018.[1][14] With launch of new poster the release date has been advanced to 11 January 2019.[15][1]
A new look poster of the film has been released by TAP official on 3 January 2019.[16]
In 2017, former Censor Board chief Pahlaj Nihalani had said that the filmmakers will need to obtain a No-objection certificates from former Prime Minister Manmohan Singh and Indian National Congress President Rahul Gandhi for the film.[17]
Ruling Bharatiya Janata Party promoted the trailer through their official twitter account.[18] Reacting to this, a Congress spokesperson alleged that the film was "political propaganda".[19]
Upon the release of the trailer, the Congress party’s Maharashtra youth wing in a letter to the producers of the films raised objections to the “incorrect presentation of the facts” and demanded a special screening of the film.[20] They later withdrew the order, intending to not publicize the film.[21][22][23]

A Firstpost article flet that the trailer of the film, seemed to suggest that Sanjaya Baru was the media advisor and chief spokesperson of Manmohan Singh during 2011 period of scams. However, Baru was only in this position during May 2004 to August 2008.[24]